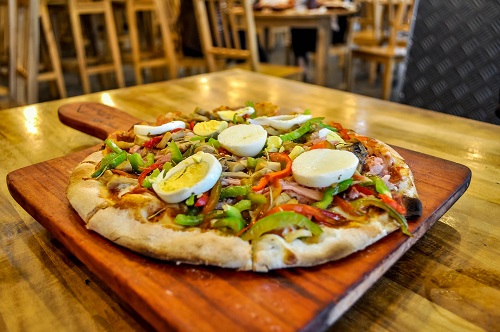 Who invented the pizza?

This is a question most of us don’t think about. We love the smell of it. We adore the taste of it. There’s nothing quite like the texture of the molten cheese or the toppings, or the sensation of a perfect crust. However, we don’t think about just where this tasty treat came from, most of the time.

We know it’s from Italy. Some of us might even assume it’s from Pisa, because of the name. Now, here’s a few fun historical details about the pizza.

There’s actually no straightforward answer for who invented this delectable dish. Part of it is because even historians and food experts can’t quite agree on how to define what a pizza is, you see.

If you think of a pizza as flatbread cooked in an oven, the origins go back to ancient times. Everyone, from the Israelites to the Babylonians, had unleavened flatbreads baked in mud ovens. They’d usually add other foods on top of it, too.

However, the notion of putting bread with toppings on top of it as a single dish on its own came from the Greeks and Romans. These were topped with olive oil and local spices. These are still available today but are called focaccia breads instead.

The style of pizza everyone thinks of – the one with cheese, tomato sauce, and toppings – is Italian in origin. In fact, apart from the tomato sauce, it existed even during the Renaissance. However, it didn’t originate in Pisa, as is popularly believed.

A baker from Naples invented the first pizza in the accepted style. However, flatbreads with toppings in that form were typical street food in Naples, so he might not actually be the inventor and just the man who got the credit for it.

In any case, the invention of it in the modern sense was in 1889. That pizza used fresh tomatoes, mozzarella cheese, and basil. If that sounds familiar, that’s because it’s known as the Margherita today! Yes, that recipe has been around for a long time.

From there, pizza variants spread across Spain, England, the US, France, and more. However, it didn’t really get any attention until after the Second World War. The soldiers returning home from battle brought with them a taste for the foods they ate while on tour.

From there, the rest is simply the fascinating history of a delicious dish.