The humble pizza is perhaps – apart from being not so humble anymore – one of the most recognizable foods in the world. Yet it comes in a variety of styles and flavours. Some of these are recent, like the Hawaiian pizza that many decry as an abomination. Some are ancient, dating back to pizza’s origins.

With that in mind, some might wonder just what are the most timeless ways to cook woodfired pizza Perth? Let’s look at some of the best recipes out there, the ones that have withstood the test of time and culinary borders.

There’s the classic pepperoni pizza, for starters. This basic idea has been around for a while now, and it’s probably the simplest on this list.

You only need the basic pizza base and lots of pepperonis. The taste of the topping adds a slight hint of saltiness and spiciness to it all, combining well with the cheese. It’s perhaps one of the most beloved and is certainly the most popular in the Americas. 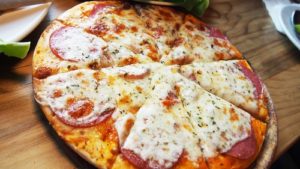 The sheer simplicity of it also helps. It’s one of the easiest to make at home if you’re so inclined.

Another classic is the Neapolitan wonder known as the Margherita.

No matter what origin story you choose for it, the Margherita is one of the best pizza styles out here. A thin crust, the fresh tomato sauce and mozzarella cheese, and a little basil. It’s simple. It’s delightful. And it has a subtle power that becomes a culinary delight without being overwhelming.

It’s one of the most timeless and one of the oldest. You can find it in a lot of places, including the best woodfired catering companies out there.

A more complicated style is the barbecue chicken pizza. This one is a bit more involved than the others.

For this, you’re looking at barbecue sauce, chicken, red onions, fontina cheese, and cilantro. It’s a mix of sweet and savoury that’s popular in the Americas but has made its way around the world. It involves a bit more toppings and preparation than the others, though.

Finally, there’s the meat lover, the carnivore, the high-protein monster. Meatballs, pepperoni, sausage. The combination that’s a go-to when feeding a hungry crowd and filled with savoury delight.

This last flavour is probably going to offend vegetarians, but it’s popular with just about everyone else. Done right, this has the right combination of flavour and intensity. It’s one of the best, most prominent styles of pizza, with a variant of it being on every pizzeria’s menu.

Visit this website to book the best pizza Perth has to offer.